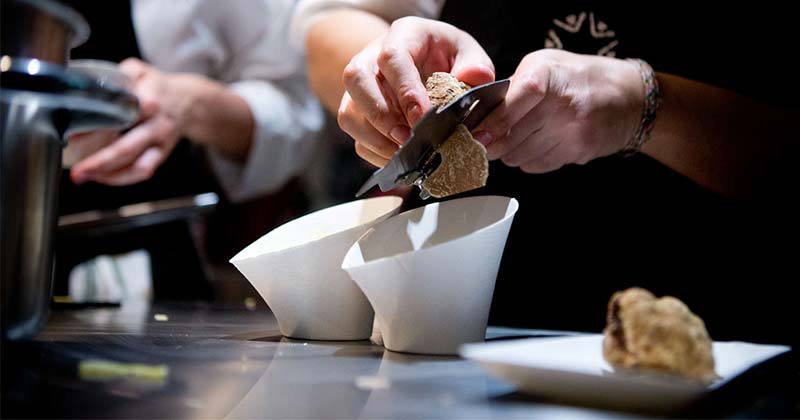 What do truffles taste like? Why are truffles expensive? When is truffle season? What even is a truffle? We hope you enjoy our handy guide…

If you’re only asking this now, where have you been??

The short answer is, a kind of edible mushroom which grows underground. They develop amongst the roots of various trees such as oak, beech and hazel under extremely specific conditions.

In the natural world, truffle spores are dispersed by animals consuming the fungus and ‘depositing’ them under new trees, today however, truffle experts have learnt how to inoculate saplings with the fungus, causing cultivated truffles to become more common. The first time I experienced black truffle was as a rich and meaty jus drizzled over a slice of succulent beef wellington and the most unbelievably delicious buttery mashed potato. Words just can’t do it justice; it was spectacular and I’ll never forget the beautiful earthy, garlicky notes of the truffle.

Since that day, I’ve sought out this rare delicacy at every given opportunity. Some dishes have been more successful than others; Amarone risotto with approximately €50 worth of black truffle grated over it was a winner, truffle cheese is now a staple part of my diet, and truffle chocolate mousse was surprisingly nice, however truffle custard was possibly a step too far! It also became apparent to me that sometimes truffle means “truffle”. Truffle oil has often never been in contact with the fungus, having had synthetic flavourings added instead, and I’m sure it’s a similar case with those greasy fries so often served in an enamel mug and sprinkled with parmesan cheese. The lesson I soon learnt was that if it’s not eye-wateringly expensive, it’s not truffle! So why are truffles so expensive?

Truffles were big business in mainland Europe, and at their peak in the 19th century they were accessible to many people and for a reasonable price. The World Wars were a huge blow to the industry, not only destroying vast areas of truffle-producing woodland, but also tragically killing those who were knowledgeable and experienced in finding them. In peacetime, when people were again able to enjoy such luxuries, their minds turned back to truffles, however, even today, supply far outweighs demand which drives prices sky high! However, fear not! Truffle growth is slowly on the rise again!

How are truffles harvested?

When I was fortunate enough to be invited on a truffle hunt at a winery in the Loire Valley, I was almost as excited as, well, a pig with a truffle! Funnily enough, I soon discovered that pigs rarely get a look in when it comes to truffle hunting these days; as champion truffle-snufflers, sows are attracted to a compound found in truffles which is chemically similar to a pheromone given off by male pigs. The downside is that, given half the chance, they will gobble down any treasure they unearth and possibly even destroy the area, rendering it unsuitable for further truffles to form. Since 1985 it is actually illegal in Italy to use pigs for this purpose due to the sheer mayhem they cause! Most truffle-hunters now use specially trained dogs to locate the fungi. The benefit of this, I found out, is that truffle hunting is little more than a game for dogs; they have no interest in the truffle itself, only in a reward from their master. The excitable collie I met in the Loire was thrown a bouncy red ball for every site he identified.

It was a chilly February morning, and we’d all been advised to wrap up warm and wear sturdy walking books. As we piled into the ancient Land Rover I’m sure I looked a sight in my leopard print jacket! The most well-behaved dog I’ve ever had the pleasure of meeting stayed firmly by his master’s side, ears raised and body tensed in anticipation of his first command. Squelching through the pale yellow mud of the woodland, it didn’t take long for our guide to identify a clump of trees with truffle potential. With a word ‘cherches!’, or ‘search!’ the hound was off! He bounded from tree to tree and back again, enthusiastically sniffing amongst the roots, apparent that he was enjoying every moment! How do you train a dog to find truffles?

Certain breeds of dog with a strong hunting instinct, such as beagles and springer spaniels, are considered the best candidates for the job. Training starts young, I’m told, with truffles rubbed on a mother’s belly so that suckling pups associate the smell with happy feelings, and continues with games of ‘fetch’ played with a hollow ball stuffed with shavings of truffle. Amazingly, so keen is a dog’s sense of smell, that they can tell the difference between a developing truffle and a ripe one, saving disappointment and waste!

My new friend the collie was an experienced truffle hunter, bouncing up and down on the spot where a truffle was nestled below the surface. Although I didn’t doubt the dog’s ability for a second, it was a wonderful moment when a black, knobbly ball was retrieved from that very spot by his master. He managed to find four within around 30-minutes, but according to his owner, he would happily keep searching for an entire day! After a few minutes of play with the ball, another word- ‘maison!’ or ‘house!’ and (much to my disbelief) the dog took himself back to the farmhouse!

The guide stressed the importance of not rewarding his partner with food as a fat and full dog would be less inclined to work hard. I, on the other hand, was more than happy to receive a culinary reward for my ‘efforts’. Freshly chopped truffle, roughly mixed with salted butter and slathered on a slice of French bread was heaven! How long is a truffle fresh for?

I was surprised to hear that a truffle is only fresh for a week! “Don’t save it for a special occasion”, the truffle farmer told us, “enjoy it straight away!” He informed us that they will keep their harvest in a sealed container in the fridge until market day (where they have often been reserved in advance by top restaurants), but it has been known for exceptionally fine examples to be flown to the US on the same day! His top tip for using up aged or undersized fungi is to seal them in a box with raw eggs. The pungent aromas penetrate the shell and make tomorrow’s scrambled eggs a rather gastronomic experience!

Most importantly, which wines pair well with truffles?

A phrase I often hear on my Grape Escapes travels is ‘what grows together, goes together’. A Nebbiolo or a Montepulciano from the truffle-growing regions of Piedmont and Tuscany in Italy pair especially well, however a well-aged, earthy red will compliment the flavours of the truffle, and it’s best to avoid pairing with light and fruity whites as the acidity will destroy the delicate flavours. When is truffle season?

In Europe, we’re lucky enough to have a truffle for each season! Between December and March head to western France to find the Périgord Black Truffle; if you’re looking to travel between May and August, Tuscany is where you will find the Black Summer Truffle; from September until the end of the year the erroneously named Black Burgundy Truffle can be found in Tuscany and the highly-prized White Alba Truffle can be harvested in Piedmont.

Where can I harvest truffles?

We can arrange fantastic truffle hunting experiences and fascinating truffle cookery classes across both France and Italy as part of a wine tour. Why not read about our Wine & Truffle package for some inspiration or contact our sales team for a bespoke experience.