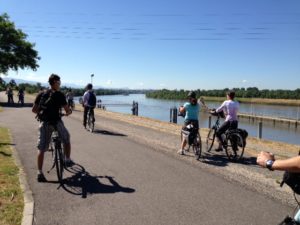 The history of the Southern Rhône is rich and varied. The towns of Orange and Vaison-la-Romaine have significant Roman heritage. Once outside the towns, the region boasts some spectacular scenery and attractive villages. The Dentelles rise up behind the villages of Gigondas, Vacqueyras and Beaumes de Venise, while the Mont Ventoux provides an even more spectacular backdrop to the region. The capital of the department is Avignon and whilst this city was important in Roman times, it is the structures of the 12th-14th Centuries for which it is justifiably famous. The southern part of the region, where the river Rhône meanders into the beautiful countryside of Provence, enjoys an enviable 2600 hours of Mediterranean sunshine per year.

The Northern Rhône’s climate is controlled by the mistral wind which defines its harsh winters and warm summers and the region boasts many prestigious wine-making villages such as Hérmitage and Condrieu. Lyon, the second biggest metropolis in France is the capital of the region. A major centre of business with a reputation as the French capital of gastronomy, the city is famed for its historical and architectural landmarks and is a UNESCO World Heritage site.